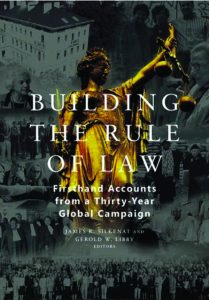 After the fall of the Berlin Wall in 1989, the American Bar Association launched a program called the Central and East European Law Initiative, designed to provide assistance to formerly Communist countries as they began the transition to democracy. ABA/CEELI, as it was known, helped these emerging democracies set up legal systems based on the rule of the law, and the programs were run by volunteer attorneys in each country. Charles Rudnick, DCD’s Director of Advancement and eighth-grade history teacher, was ABA/CEELI’s first representative in Bosnia-Herzegovina and ran the program there from 1995 to 1997. His reflections on his time in Bosnia are included in a new book commemorating the 30th anniversary of the program, now known as the ABA Global Rule of Law Initiative. The book, Building the Rule of Law: Firsthand Accounts from a 30-Year Global Campaign, was published by the ABA in September.

Leadership Beyond the Halls of DCD