Who are you? How do you identify? 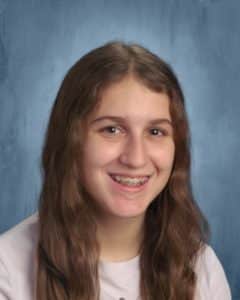 My name is Alexandra Bloom. I am an 8th grader, and this is my 6th year at DCD. I identify as Jewish, and a girl. I have a rescue dog named Bailey, a younger sister in 4th grade at DCD, and exceptional parents. My religion plays a bigger role in my life than just being at temple during the holidays, or being a Madricha, which is “leader or teacher” in Hebrew. I am a Madricha for a class of 14 kindergarten students at my temple, I help them learn the Hebrew Alaphabet, and we speak in Hebrew.

What is a part of your identity that is important to you?

I think being Jewish is the most important part of my identity. Before I felt like the only kid in the world without a Christmas tree in their house. I remember when I was younger I used to beg my parents to buy me a Santa hat so I could wear it at school, and feel included. DCD has really helped me feel included in what was once the darkest time of the year for me. We have a special day right before Winter Break called “Winterfest.” Winterfest is a day when the whole school learns about different holidays and how they are celebrated around the world during December, and we make art projects and color an important symbol in the holiday. After my Bat Mitzvah, and the support by Ms. A-C talking about the different Jewish Holidays at assemblies, I don’t feel like “the kid without a Christmas tree in their house”. Now I feel like the “kid with the Menorah in their house”. I believe Judaism is the most important part of my identity, and my life.

What is your favorite holiday?

My favorite holiday is Passover. During Passover my family drives to Montreal, Canada to see my extended family. Passover is a holiday celebrating the ending of the slavery of Jews in Egypt. Another reason why it is my favorite holiday is because Moses was so courageous to tell the Pharaoh of Egypt: “Let my people go!” Although Pharaoh did not listen to Moses to let the slaves go, Moses came up with a plan to escape Egypt with the Israelites. Moses also inspired me to become courageous when I came to DCD in 3rd grade. I was so scared that I was not going to make any friends, since many students have been there since Kindergarten. But in the end, I made so many friends and I love the community here. My family also celebrates Passover a little differently. Normally the youngest grandchild chants the four questions in Hebrew. But since my cousins are years younger than me, and since I am the oldest grandchild in my family, I chant the four questions. Whenever I chant the four questions, it always brings back memories to me chanting aliyahs on the beama during my Bat Mitzvah.

Do you have a favorite family tradition?

My favorite family tradition is on Yom Kippur. Yom Kippur is the most religious and holiest holiday in the Jewish year. After the long and hard thinking we have to do in Temple for hours in the morning asking god for forgiveness, my family and I go to the nearby river called “Emerald Stream” and we throw pebbles into the water and ask God for forgiveness. The pebbles represent our sins and how we are washing them away and starting the new year fresh.